Here are some scenes from this year's reading of the Declaration of Independence outside the Harris County Criminal (In)justice Center. A special thanks to HCCLA President Chris Tritico, former HCCLA President Robert Fickman and everyone else involved in putting this incredible performance together.

Today's reading in Houston was one of dozens that took place across the country this morning. Attorneys in 13 states read the Declaration of Independence on their courthouse steps in a moving tribute to what we fight for on a daily basis. 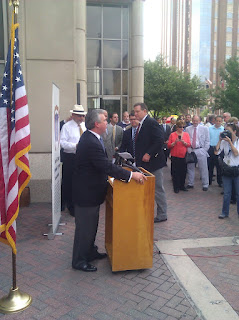 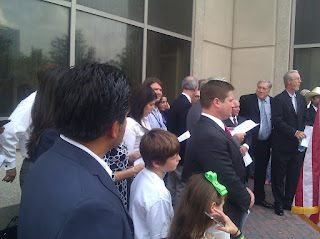 Some of the lawyers lined up to read their parts. 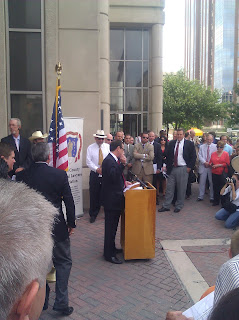 Robb Fickman, the man behind the tradition reads from the Declaration.

Lawyers read the Declaration in front of the courthouse in the wild west Texas town of San Angelo and in Corsicana (just a bit south of Dallas). Out in Tyler (in East Texas), 13 lawyers read the nation's founding document in front of a crowd of about 100 people plus local television cameras. Interestingly enough, no one from the Smith County judiciary or district attorney's office was able to make an appearance.

Lawyers also read on the courthouse steps in Longview, Nacogdoches and Paris.

Email ThisBlogThis!Share to TwitterShare to FacebookShare to Pinterest
Labels: Declaration of Independence, HCCLA