Now Jim Crane, the new owner of the Astros, wants to get rid of the train that runs atop the stadium wall on Crawford Street. No, their is absolutely no connection between the Astros and locomotives. The train is a gimmicky homage (among all of the other gimmicks at the ballpark) to the former occupier of the lot - Union Station.

As a condition of MLB approving the sale of the Astros, Mr. Crane had to agree to abandon 50 years of tradition and allow the team to be moved to the American League. But if he wants to get rid of the train he should come up with a better reason than putting up more advertising signage.

More and more over the past decade, ballparks are becoming giant advertising vehicles in which a game just happens to be played. 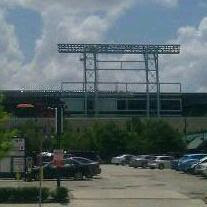 Workers last week attached these massive metal frames to the light tower in left field that will block most of the track upon which the train runs.
Posted by Paul B. Kennedy at 8:00 AM