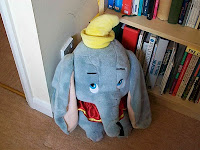 The blow-dried one, Gov. Rick Perry of Texas, is willing to do whatever he can to erase the stink of an innocent man being executed under his watch -- and his lapdog, Williamson County District Attorney John Bradley, is doing just as his master commands.

This morning in Houston, the Texas Forensic Science Commission met with Mr. Bradley's move to bury the Cameron Willingham matter heading the agenda. Bradley has prepared a memorandum that would remove the Commission's authority to investigate the Willingham matter any further. According to the Houston Chronicle's Rick Casey, the memo is unsigned and undated but states it was drafted, edited and approved by Mr. Bradley and two other members of the Commission - one of whom, Lance Evans, is a defense attorney and member of TCDLA.

Ever since questions arose regarding the evidence the state used to convict, and later murder, Cameron Willingham, Gov. Goodhair has done everything in his power to make the elephant in the corner disappear. The last thing Perry wants to have to do is answer questions about the Willingham case during the fall campaign for the Governor's Mansion.

The governor's toady, Mr. Bradley, has been only too glad to do Perry's bidding as he continues to disregard his ethical duty as a prosecutor to see that justice is done.

Based on this Houston Chronicle report, Gov. Perry will be a happy camper tonight as four members of a committee found "insufficient evidence" to suggest that arson investigators were negligent or committed acts of misconduct in their investigation.

Members of a commission reviewing the disputed conclusion that a Texas man committed arson, which led to his 2004 execution for the deaths of his three children, say they do not believe fire investigators in the case committed negligence or misconduct.

Members of the four-person panel within the Texas Forensic Science Commission that is reviewing the probe said Friday their initial findings conclude there is insufficient evidence to establish whether there was negligence or misconduct on the part of the arson investigators. The investigators concluded Cameron Todd Willingham set a 1991 fire at his family's Corsicana home that killed his three young daughters.

A final report on the probe was set to be presented at a commission meeting later this year.

Gov. Perry had the opportunity to discover the truth in the Willingham matter but, instead, chose political expediency. What does this say about the other men sitting in Texas prisons based on testimony of junk scientists?
Posted by Paul B. Kennedy at 5:00 PM