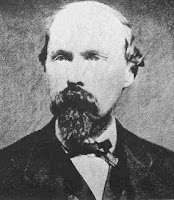 Dr. Samuel Alexander Mudd died 127 years ago today. For those of y'all not familiar with Dr. Mudd's story, he was imprisoned for conspiring to assassinate President Abraham Lincoln.


On the evening of April 14, 1865, in the Ford Theater in Washington, D.C., President Lincoln and his wife settled down for an evening of amusement in their private box. In the middle of the play, John Wilkes Booth stepped into the box and fired a fatal shot in the back of the president's head. Mr. Booth leapt from the box to the stage below, breaking his leg in the process.


Early the next morning Mr. Booth and his cohort, David Herold, stopped at the Maryland home of Dr. Mudd. The good doctor, a supporter of slavery and the Confederacy, set the broken bones, made a pair of crutches and sent Mr. Booth on his merry way. After Mr. Booth was allegedly killed by Union forces in a barn, Dr. Mudd was charged with conspiring to assassinate President Lincoln. 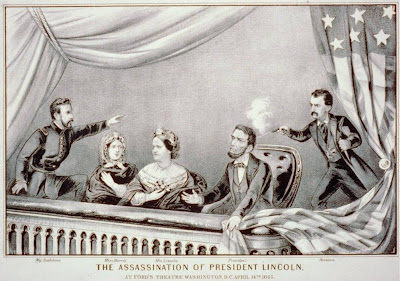 On June 29, 1865, Dr. Mudd was convicted of conspiracy and dodged the hangman's noose by one vote. He was sentenced to life in prison. In February of 1869, Dr. Mudd was pardoned by President Andrew Johnson and returned home. On January 10, 1883, Dr. Mudd died of pneumonia. He was only 49.

We start off with news from The Innocence Project that makes it even more likely the State of Texas murdered an innocent man when it executed Cameron Todd Willingham for the murder of his three children. After months of wrangling, the Texas Forensic Science Commission heard from arson expert Craig Beyler this past week. In his testimony, Mr. Beyler concluded that the cause of the fire was accidental.

Ohio criminal defense attorney Jeff Gamso reminds us that in life, and trial, there are many victims. And they aren't all who you might think.

"Sticks and stones may break my bones, but words will never hurt me." Well, unless you find yourself in Pakistan calling Muhammad a liar. A woman is on death row for doing that and a man is dead for urging the repeal of the blasphemy laws.

For those of you who think the system works just fine as it is, Grits for Breakfast brings us the tale of Texas' latest exoneration.  Cornelius Dupree served 30 years for a crime he didn't commit. That's 30 years that neither he nor his family can get back. In the words of Dr. Martin Luther King, Jr., "justice delayed is justice denied."

Rick Horowitz asks you to take a minute and imagine how it would feel to watch your life pass by in prison when you're the innocent victim of a miscarriage of justice. How does that affect your concept of reasonable doubt?

Mirriam Seddiq wants you to pick up a pen and a piece of paper and note the milestones of your life. Then she wants you to imagine they never happened. Even that doesn't begin to sum up what Mr. Dupree lost.

The Dallas Observer has a few thoughts on why our (in)justice system would prefer to look forward instead of in the rear view mirror. Here's a hint, it might be gaining on you.

Jamison Koehler relates the tale of Jabbar Collins: Jailhouse Lawyer who, through his dogged determination (and lots of time on his hands) managed to get his murder conviction overturned.

D. Todd Smith's Texas Appellate Law Blog looks at the triumph of legal sufficiency over factual sufficiency in the Texas Court of Criminal Appeals. Legal sufficiency was to be determined by looking at the evidence in the light most favorable to the verdict, while to determine if the evidence was factually sufficient to support the conviction you looked at it in a neutral light. With the increasing number of exonerations, did the court make the wrong decision?

Brian Tannebaum gives us his two cents on how defense attorneys deal with prosecutors who run afoul of the law. Our Florida colleague points out that the reaction often depends upon the maturity level and character of the prosecutor in question.

And then there's the attorney who hits the wrong button and files a document that should never have been seen. Mark Bennett takes a look at how an attorney made his client a marked man.

The question of whether Samuel Mudd was a part of the conspiracy to assassinate President Lincoln still rages on. According to Dr. Mudd, the only time he ever met with John Wilkes Booth was in Washington, D.C. in November 1864. When first questioned about the mysterious patient who showed up at his house, Dr. Mudd denied knowing the man's identity.


According to testimony, however, Dr. Mudd knew the conspirators and suggested a getaway route for Booth and his partner, David Herold.

Stewart Baker over at the Volokh Conspiracy asks that age-old question: when is a fence not a fence? Maybe it's when it's not in your backyard.
Now los federales have taken to issuing subpoenas to people involved with WikiLeaks to determine who is to blame for the egg dripping off their faces. The Trial Warrior, Antonin Pribetic, pays homage to Martin Luther while assailing the tactics and motives of the DOJ. As he points out, it's not a long trek to tyranny.


Where did our old friend, the 4th Amendment, go? Norm Pattis writes about yet another court chipping away at one of our most essential protections all the while claiming allowing the police to search your cell phone is a logical extension of the Terry stop.
Scott Greenfield over at Simple Justice also finds himself appalled at the California Supreme Court's ruling that the police don't need a warrant to search an arrestee's cell phone. He points out that we've been down this road, or should I say slippery slope, before. Where are those "original intent-ers" when you need them? That's right, conveniently forgetting their convictions when law and order calls for it.
And while we're on the subject, Eric Turkewitz wants to know what would possess a police officer to issue a citation for jaywalking to a girl who suffered brain damage when she was hit?
Austin's Jamie Spencer does a modern twist on Soggy Sweat's speech on whether he was for or against the sale of whiskey in the Magnolia State. Oh the similarities between the devil's water and that evil reefer.

And of course what would a Blawg Review from the Lone Star State be without an update on the increasingly bizarre case of R. Allen Stanford? Our friends at Tex Parte Blog come bearing news. Those billions he stole are paying off with the best indigent defense money can buy.

Contrary to popular belief, the phrase "Your name is mud" does not find its origins in the saga of Dr. Samuel Mudd. The phrase actually dates back to 1823. In his book, Slang: A Dictionary of the Turf, etc., John Badcock writes that "mud" refers to a stupid twaddling fellow. But, as an old history professor of mine at the University of Texas pointed out, mud spelled backwards is dum.

Ever wonder how judges in family court maintain their sanity (a huge assumption, I know)? Read how a Canadian judge dealt with dueling spouses. There are times to let it all hang out -- and other times not to.

Meanwhile, the boys at Patently-O get to the bottom of whether everything that can be invented has been invented.


Having trouble finding that perfect balance between work and life -- or coffee time and down time? No problem, Amy Derby has the cure for your woes.
But if you're involved in social media litigation, or just hanging out at your office the local Starsucks, you might just need that social media/SEO expert to enlighten the jurors as to what in the hell's going on. Or not.
On that fateful April night, Dr. Mudd made a decision that carried with it great consequences. Whether he knew of the conspiracy to assassinate the president or whether he was part of it are questions for which I have no answers. He did, however, make a choice to lie about Mr. Booth's visit when asked by investigators. And, for that decision, he paid a very steep price.

What's the best way to exert control: formally by enacting laws or informally by applying peer pressure? Karen Sternheimer has some questions as to whether legislating morality works.

British Columbia injury lawyer Erik Magraken has an interesting way of looking at settling a tort claim. When you settle that claim, you're not being compensated for your injuries -- you're actually selling your right to sue.

Ian Ayres over at Freakonomics thinks the best incentive is the incentive we create in order to force us to accomplish something.

"I have consistently preached that nonviolence demands that the means we use must be as pure as the ends we seek." -- Martin Luther King, Jr.


"There are many causes I would die for. There is not a single cause I would kill for." -- Mohandas Gandhi

And before I hand Blawg Review off to Gideon and his excellent blog, A Public Defender, I would be remiss if I didn't mention the aftermath of Saturday's tragic shootings in Tucson. The Wall Street Journal's Law Blog published this obituary for US District Judge John Roll who was one of the victims of the shooting.

Blawg Review has information about future hosts, and instructions on how to get your blawg posts reviewed in upcoming issues.
Posted by Paul B. Kennedy at 9:00 AM