Back in February 2006, Gerardo Lujan and a passenger were driving around when they came across a checkpoint set up for the (alleged) purpose of checking for valid driver's licenses and insurance. According to police, if a motorist showed a valid license and proof of insurance, he was sent on his way. If a motorist did not have a valid license and proof of insurance the officers would cite them and check for other violations and for warrants. Of course the police had a K-9 unit on hand. 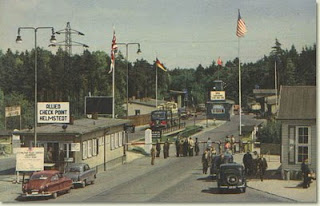 Coming soon to a town near you?
Upon being stopped, Mr. Lujan told the officer he did not have a driver's license. He was told to pull over at which time police questioned his passenger - who was not carrying a license either. The two men gave officers similar stories of where they had been (the only significant difference being the name of the friend they were visiting). A check showed the passenger had outstanding warrants and he was taken into custody. All of this without any evidence that the passenger had committed any criminal act.

After placing the passenger under arrest the officer informed Mr. Lujan that he needed to pat him down for safety reasons (again, no reason given). Lo and behold, the officer discovered over $1,000 in cash in Mr. Lujan's pockets (no crime in carrying cash). The officer then asked for permission to search the car and Mr. Lujan (apparently in the midst of a brain fart) consented. Needless to say the police found cocaine hidden in the passenger-side door with the help of their drug-sniffing canine friend.

While the trial court (surprise, surprise) denied Mr. Lujan's motion to suppress, the El Paso Court of Appeals overturned the conviction on the grounds that the checkpoint violated Mr. Lujan's Fourth Amendment right against unreasonable search and seizure.

The Texas Court of Criminal Appeals then reversed the Court of Appeals' ruling and reinstated the conviction. One of the reasons given for the reversal was that without findings of fact and conclusions of law from the trial court, the CCA was left to assume that the trial court made implicit findings of fact consistent with the evidence on the record. The CCA found that the checkpoint was valid because they could interpret, from the record, that the primary purpose of the checkpoint was to check driver's licenses and insurance and that the police would only investigate other potential criminal acts if warranted by their observations.

If the primary purpose of the checkpoint is lawful- a license check as opposed to general law enforcement-police can act on other information that arises at the stop. The checkpoint's primary purpose of license and insurance verification does not prohibit police from considering other unrelated offenses that they discover during the stop. Edmond, 531 U.S. at 48. In Edmond, the Supreme Court made clear that officers are not required to conduct the license and registration check wearing blinders and ignoring any other violations of the law that they observe. Officers can still act on what they learn during a checkpoint stop, even if that results in the arrest of the motorist for an offense unrelated to the purpose of the checkpoint. Id.

A brief suspicionless stop at a checkpoint is constitutionally permissible if its primary purpose is to confirm drivers' licences and registration and not general crime control. Id., at 39. In denying the motion to suppress, the trial court implicitly found that the primary purpose of this checkpoint was a permissible license and insurance check. Ross, 32 S.W.3d at 855.

With its ruling in Lujan v. State, No. PD-0303-10 (Tex.Crim.App. 2011), the Texas Court of Criminal Appeals is signaling to law enforcement that sobriety checkpoints may just be alright in the Lone Star State. The rationale from the Court seems to be that so long as the police can claim that the checkpoint is set up for the purpose of checking driver's licenses, then anything goes. In its haste to legalize checkpoints, the CCA managed to avert its eyes when evidence was presented that demonstrated the stated purpose of the checkpoint was a sham.

However, Judge Meyers, in his dissent, noted that the explanation of the stop given by the police officers seemed a little bit shady considering a K-9 unit was on hand:


The checkpoint in this case included a K-9 unit. So, if the primary purpose of this checkpoint program was, as the majority concludes, to check drivers' licenses and insurance, then the deputies did not need drug-sniffing dogs. This was akin to bringing a gun to a knife fight, and from then on, it was officially a gun fight. Based upon the facts of this case, I disagree with the majority and would conclude that the primary purpose of the checkpoint was to "uncover evidence of ordinary criminal wrongdoing," in contravention of the Fourth Amendment.

Local law enforcement has just been given a blueprint by the CCA on how to run a sobriety checkpoint that will pass muster in Austin. Don't be surprised to see local police setting up driver's license checkpoints on weekend nights near entertainment districts.

Oh, and if you argue a motion to suppress, always, always request that the court issued conclusions of law and findings of fact. If you don't you're setting yourself up for a fall before the CCA.
Posted by Paul B. Kennedy at 4:06 PM

doesn't mean it is constitutional. Texas is violating the 4th Amendment.

it is just harassment.

Texas has become a police state. I never go anywhere except work and the store. I have become afraid to travel in Texas.

Will be retiring out of the U.S.