So what's the big freaking deal about the 1%? Just what exact share of the national income do the top 1% of wealthy Americans bring in?

The answer may surprise you.

The Paris School of Economics has compiled a database of the world's top incomes. You can pull up information from 26 nations around the world from the early 1900's up through 2008. 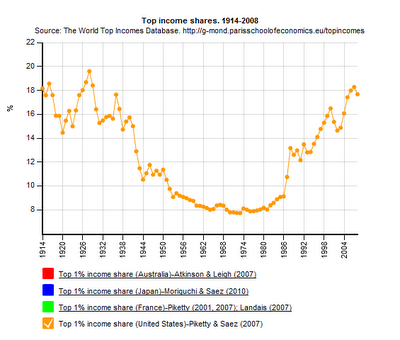 Income inequality in the US is now at about the same level as it was before World War I. And we call that progress.

The numbers are astounding and give us a portrait of the growing inequality in this country.
Posted by Paul B. Kennedy at 8:00 AM

Email ThisBlogThis!Share to TwitterShare to FacebookShare to Pinterest
Labels: economics