I'm no expert on maritime law. In fact, I know next to nothing about it. I know that if someone is injured on a ship out in the water the Jones Act comes into play and cost of litigation increases. I also know that the field is so specialized that there are some firms that handle nothing but litigation against cruise ships. 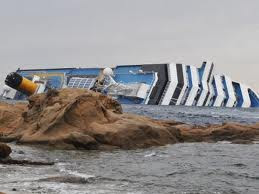 Having said that, though, there are some things that are quite odd about the goings-on surrounding the Costa Concordia mishap.

Typically in an accident case involving a commercial truck, the owner of the truck keeps the driver on the payroll. The company also avoids blaming the driver for the accident knowing that any such accusations will only come back to haunt it during litigation. They want to keep the driver happy because they know if they cut him loose he will only be too happy to discuss the litany of safety violations committed by his employer with the plaintiff's attorney. Now, after the litigation is resolved, all bets are off.

I found it odd that Costa Cruises, the owner of the cruise ship, would come out publicly and blame the accident on the captain, Francesco Schettino. The company can't distance themselves from Mr. Schettino. If they want to blame the accident on his negligence, they are setting themselves up for claims of negligent entrustment, negligent training and negligent oversight. (Of course I have no idea whether these are even valid causes of action in whatever court these suits will eventually be heard.) They are also just asking for someone to look into other incidents in which cruise ships were taken off course.

I don't know what happened last Friday aboard that ship. I'm certain it was a harrowing experience for everyone on board. I understand Mr. Schettino is human and subject to the same emotions as everyone else. Maybe everything is his fault. But the actions of Costa Cruises are peculiar and I do wonder what purpose they were meant to serve.
Posted by Paul B. Kennedy at 9:00 AM