This past December Major League Baseball announced that the National League MVP, Ryan Braun of the Milwaukee Brewers, had tested positive for elevated levels of testosterone. He was suspended for 50 games. 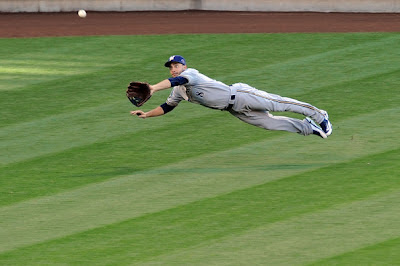 The media immediately lumped Mr. Braun in with other players known, or suspected, to have used performance enhancing drugs. Nevermind that nothing had been proven. Nevermind that Mr. Braun had not yet exercised his due process rights under the collective bargaining agreement. Nope, it was enough that MLB announced his test was positive. Ryan Braun was a cheater.

Umm. Not quite so fast.

To the chagrin of MLB officials, an arbitration panel overturned Mr. Braun's 50-game suspension on Thursday. It turns out that Mr. Braun wasn't a cheater, after all.

Of course that didn't stop MLB and the US Anti-Doping Agency from announcing their disappointment with the panel's decision - the first time the panel has overturned a suspension for suspected use of performance enhancing drugs.

And what, pray tell, convinced the panel to overturn the suspension? Well, it turns out that the urine sample provided by Mr. Braun wasn't sent to the lab on time. He submitted the sample on a Saturday but the collector decided it was better to hold the sample for the weekend rather than ship it to the lab via FedEx. Instead of being sent to the lab within 24 hours, as the collective bargaining agreement calls for, it wasn't sent for more than 48 hours had passed.

That old pesky chain of custody. Had the collector submitted the sample when he was supposed to do so, there wouldn't be a question of whether anyone had tampered with the sample. But, by holding on to it over the weekend, the collector created doubt about the veracity of the test.

It also turns out that after learning that the sample tested positive, Mr. Braun requested a second test that came out clean.

The lesson, of course, is that just because a test comes back positive, it doesn't mean that the test subject did anything wrong. Whether we're talking about urine tests for PEDs or blood or breath tests for alcohol, the test result is nothing but a number. The real question is what's behind that number?
Posted by Paul B. Kennedy at 7:00 AM

Email ThisBlogThis!Share to TwitterShare to FacebookShare to Pinterest
Labels: baseball, due process