Standing on the shoulders of giants

"We just wanted to tell our wives we were at a meeting when we were out drinking." -- Richard "Racehorse" Haynes, as told to Chris Tritico

Last Thursday the Harris County Criminal Lawyers Association honored its five surviving founding fathers. Back on November 4, 1970, a group of defense attorneys got together and decided it made sense for the defense bar to work together. From those humble beginnings HCCLA has grown to over 600 members.

The five men, Richard "Racehorse" Haynes, Dick DeGuerin, Jerry Patchen, Don Smith and Theodore Trigg were honored by the current membership and members of the local judiciary for laying the foundation for today's HCCLA. 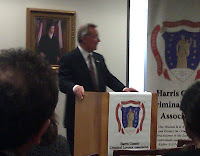 When asked what it meant to be a defense attorney, Jerry Patchen said we are the last refuge for the accused and the guardians of freedom. He said it is our duty to stand in "eternal opposition" to the government. 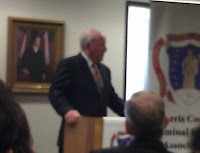 Don Smith, well known for his wild ties, told the audience that he was proud of what the organization had become.

Theodore Trigg, who was obviously humbled by the ceremony, said as a defense attorney you must always be there for your client and that we have a license to help people.

Racehorse Haynes wasn't able to attend due to a broken hip he had suffered the night before. But Chris Tritico told us that Mr. Haynes always said our duty is to stand up for those people.

A special thanks is owed to Earl Musick, the current president of HCCLA, for putting the ceremony together. Well played, Earl.
Posted by Paul B. Kennedy at 8:00 AM

Email ThisBlogThis!Share to TwitterShare to FacebookShare to Pinterest
Labels: HCCLA

Kudos to the HCDLA. We just think we have it hard now. Those men - and others like - were the true warriors.