One of my guilty pleasures is watching Finding Bigfoot on Sunday nights. If you haven't seen the show it's about four bigfoot "investigators" who travel across the country looking for evidence that bigfoots (or is that "bigfeet") exist. 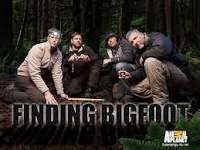 The group's leader is named Matt. He's the head of the Bigfoot Research Organization. Another group member is Ranae who is a biologist. Cliff and Bobo are the other members of the team.

Being the scientist, Ranae is skeptical of the existence of bigfoot. Whenever the teams speaks to folks who say they have had encounters with a bigfoot, Ranae looks for some other explanation while the other members step all over themselves expressing how much they think whatever the person saw or heard was a bigfoot.

As I watched the other day I couldn't help but think of jury panels. Ideally the members of the jury panel would be skeptics. After all their job is to determine whether or not the prosecutor has proven his or her case beyond all reasonable doubt. That means they should treat trial like a scientist would treat an experiment - a chance to prove the hypothesis wrong.

After all that's what the scientific method is all about. You develop a hypothesis and design tests to disprove it. If, after conducting all of your experiments, the hypothesis hasn't been disproven, it stands to reason that it might be true.

But that's not how jurors seem to think. Most jurors don't understand what's behind the scientific method. They look at trial (and experiments) as a way of proving up a hypothesis. In other words, instead of forcing the prosecutor to prove each and every element (being skeptical of the charge), they force the defendant to disprove the state's theory. This backward approach means that instead of forcing the state to prove up each and every element of its case beyond all reasonable doubt that they are forcing the defendant to point out reasonable doubt as the case moves along.

And along with such a mindset comes a complete discounting of the presumption of innocence.

Just like the three members of the team who start off with the assumption that bigfoot is real, jurors who miss the point of the scientific method are looking out for any evidence that supports the state's theory of the case without applying the skepticism that is a hallmark of science.
Posted by Paul B. Kennedy at 7:00 AM

What's not to believe, if the forensic expert believes in Bigfoot?

The first line of the abstract reads, "One hundred eleven samples of blood, tissue, hair, and other types of specimens were studied, characterized and hypothesized to be obtained from elusive hominins in North America commonly referred to as Sasquatch."

David Spence is the lab manager of the Trace Evidence/Hair Examination in the Dallas County Crime Lab (aka SWIFS).

That's right...the taxpayers of Dallas paid for the crime lab to use resources and manpower to study Bigfoot.

This guy testifies as an expert for the prosecution.